Implementing Video in Your Company Marketing Strategy: Part I – The Propinquity Effect

Part I: The Propinquity Effect

In the early days of the internet, marketing consisted almost entirely of appealing to the reader through effective copywriting. This was largely due to the old dial-up connections, and the fact that it just wasn’t practical for the vast majority of web users to try and watch a video.

These days, things have changed radically. Now almost everyone has a high-speed connection, and web videos can be watched not only on our PCs, but also on tablets, smartphones, and through regular television. To give you some idea of the popularity of video these days, it is useful to consider the fact that YouTube is now the world’s second largest search engine.

That’s right. YouTube is more than just the largest video platform in the world. It also has a search engine that receives more traffic than every other search engine in the world – except for its parent company Google. So with video becoming more popular each year, it is critical for your company to utilize its power to grow your customer base.

In this series, we are going to give you even more reasons to consider implementing video into your company marketing strategy. In part I, we are going to discuss a little-used term that helps explain a lot about why video marketing is so effective: the “propinquity effect.”

Simply put, propinquity is a psychological term that refers to the effect of feeling connected to people or groups you see and/or interact with consistently. Propinquity can play out practically in a number of ways. For example, two people who work together, are near each other a lot, share the same experiences, etc. often develop a bond. This is a major reason why so many romantic relationships are formed between co-workers, rather than someone you meet one time at a night club.

Propinquity can also occur through the frequency and familiarity of someone, even if you have never talked to them in your life. This happens all the time with certain TV personalities you know and trust; such as your local news anchor, weatherman, or even an actor from a favorite show. When you see someone on TV frequently, you get to know their personality, and a certain level of trust is formed.

The second example cited earlier most resembles what can be accomplished when you produce videos as part of your marketing strategy. When your target audience watches your videos, they get to know you, and the personality of your company. This often leads to an emotional connection, and a sense of comradery develops. Though the prospect may not express it consciously, their subconscious says “I know this guy – what he says makes sense to me, and I believe his product/service can help me.”

Blog posts and articles are great, and they should also be part of your content marketing strategy, but you simply cannot establish this type of connection with clients and prospects just by writing content. This is one of the reasons a well-produced video helps you stand out from your competition. For the one-time effort of creating the video, you have a 24-hour marketing machine that is building trust and familiarity with your client base even while you sleep.

And don’t forget, a lot of videos end up “going viral” – meaning your clients and prospects start sharing something they’ve watched that “touched” them with their circle of influence. This is one of the fastest ways to grow referral business, and it all happens because targeted viewers – many of whom you have never even met personally – have now become your brand ambassadors. And this, in a nutshell, is what the propinquity effect is all about. 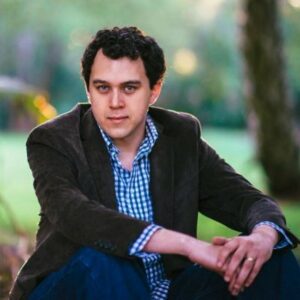 Andrew Cardy is a natural born storyteller. He’s worked with national brands including the NFL and ABC, as well as Academy, Tony, Grammy, Emmy, and Dove award winners in a variety of capacities. [View Full Bio]

it's time to tell your story.

Let us help you tell it well.